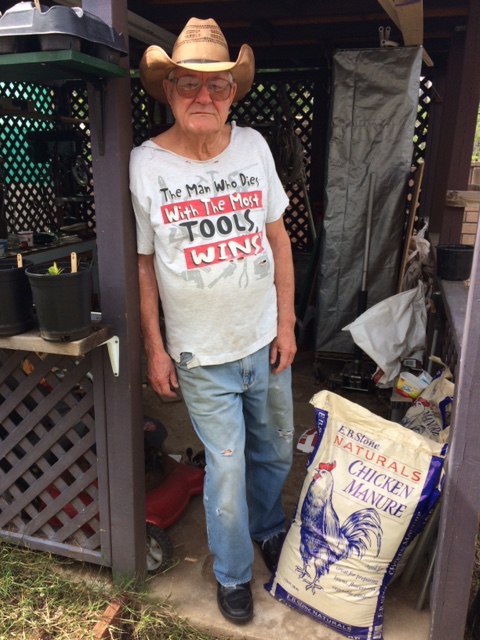 When I entered the world I was the fourth child having three older sisters, Jean, Bonnie and Frances and a little sister Mary. There was an older brother that died at birth.

My novel Post Hole Digger documents my life from first memory until I joined the Navy and the submarine service. Retiring after twenty-seven years.

It was instilled in me, as was my sisters, a close family unit. We were all taught to do as much as we could to make life easier for everyone in the family. This included everything from house work and evening farm chores to shorten dad's work day.

Dad always seemed to know when I was ready for more responsibilities. Sometimes it was me insisting, like wanting to learn how to drive a tractor.

In the summer, family time was after supper, when the family would do the garden, plant and weed. The garden was very large as it took 100 quarts of each of the major vegetables to last through the winter. Canning time was hard, hot work, copper boilers of water on the wood fired stove heating up the house. Sometimes mom would run out of canning supplies. She would call the grocery store, place an order and I'd walk the three miles to town to get them.

In the second and third grades, a trucker hired dad and me to break horses and colts. One of the colts I was told was the son of Roy Rogers horse Trigger. He got picked up in Oklahoma for horse stalling and spent two years in the Oklahoma State Prison.

By the third grade, I was doing chores using a tractor. Fifth grade, I was operating our D-8 caterpillar and doing field work with a tractor. Also I was hiring out to neighbors.

I was making enough money. Except for Christmas and birthdays, that was the last year my parents bought me any clothes. In the spring of the sixth grade, dad and I were chasing horses on foot when he had his first heart attack. I held him until he could walk. I helped him to the house. He rested a day and back to work. The doctor was thirty miles away, told dad he had to quit farm work.

Dad was accepted as a janitor of the Macedonia Iowa Consolidated school house. We lived in the janitor's quarter under the gym. Dad and I worked hard tracing out all the utility systems and learning how they operated. I was responsible for the school yard. During the school year, dad divided the school into four sections. Bonnie, Frances, me, and dad, each had a section to clean and be responsible for.

During the summer between eighth and ninth grade, dad's health started failing. By the time I started the ninth grade, I was doing more and more of dad's work. By January, dad was bed ridden. On March 18, 1953 dad died in my arms as I was trying to get a micro tablet under his tongue.

At age fifteen, I became the janitor of the school, supporting my mother and little sister. At the end of the school year, the school board wanted me to stay on as janitor. I said no.

I took a job as hired man on the John and Vonda Koch farm at Neola, Iowa, making $125 including room and board.

This part is hard for many people to understand. At the end of the first month, Vonda wrote me a check. About three weeks later John said, "Vonda can't balance the books. Have you cashed the "check?", “No” I said. Vonda tore up the check she gave me for two months. I didn't cash that one either. Vonda proposed paying once a year. Two weeks before school started she would write my check for everything I had coming. It worked great. I worked for John and Vonda for four years and got four pay checks. I learned some great lessons. Vonda still laugh about it to this day.

Writing background. While serving on submarines, I started keeping note of interesting stuff and collecting pictures. My first writing attempt was a novel titled Innerspace Nomads. Sales started off very poor and got worst from there.

For my second novel Trifecta, I used a combination of social experiences and my creativity. The story line is about a man that has a sexual relation with three generations of women from the same family.

My third novel, Post Hole Digger (PHD) is about my life from first memory to joining the Navy and entering the submarine service.

My fourth writing endeavor, Primer for the White Knuckled, Jellied Kneed Socializer is a confidence builder.

My fifth endeavor, Stepping Stones to the ARCH De Pleasure, documents my actual sexual experiences. As you read, you'll learn why I only like the 1958 Corvettes.

As I stumbled through life, searching for a partner that likes to do all the things I like, plus be adventures and open to new experiences.

I feel I am the luckiest person on earth for being accepted by a great lady, Gerry Dye. Same age and we enjoy each other on every level. After thirty-two years of living together, there is never a day that goes that we take each other for granted. Every morning, the first priority is what can we do today to make life easier for each other. We do not chase fads. Need are always the priority of life.

We got all our heavy international travel done before we retired. In my case, at age sixty, I just stopped going to work.

WE VOWED NOT TO GO TO OUR GRAVES SAYING I WISH I HAD DONE THAT!